LIFE
HAS
BEEN
NON
STOP
LATELY.

BOY DO I HAVE SOME STORIES TO BLOG ONCE THE DUST SETTLES !


Fancy meeting you here again, of all the blogs in the whole wide world you’ve stumbled across mine. More likely than not though you’re an acquaintance or friend, if not you will be soon!

So it’s been a crazy couple of days, but it’s actually been super productive and mind I say a little bit fun! My darling friend Aliyah is a ‘wee’ bit more experienced at being freelance than I am and we met-up on today to mind-map my life and plan where I’m going next. 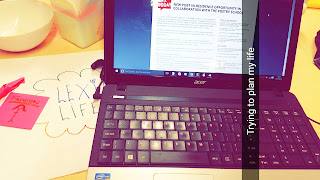 Going out today has saved me from the normal dark honeymoon stages of freelance, you know the one…

Sitting around in your sweatpants or PJ’s, watching endless reality programs to validate to yourself that your life could be worse, or just zombieing-out (I assure you that is a real adjective, if not I’m coining it) to Netflix, I’m not judging I love me some thrash TV too.
Whilst eating copious amounts of carbs and sweet-stuff, not bothering to pick off the crumbs, yet alone having showers and washing ones hair. I mean we all know getting out of bed and having showers are for the employed.


I jest, but in all seriousness, I’m sure this super productive power surge I’m on will wane sometime soon, most likely when the rejections come flooding in or worst yet the tumble weed of cyber space silence (DID THEY GET MY EMAIL?! OR ARE THEY JUST IGNORING ME?). Until that day comes though and the optimistic part of my brain is in charge I’m going to keep hustling.

So today I focused on the economical landscapes of my new life, I invested in a three year railcard. This may not seem like such a big deal to some but I’ve never had one as most auditions I’ve had have been here in Brum or video-taped and sent off into the great abyss and if I needed to be in good old ‘Landan town’ I’d just get the coach down or have enough time to scour the web for cheap train tickets. But time is of essence and I will be travelling a lot more now at short notice with fewer funds, so I needs me them cheap tickets.

I spent quite a large portion of the day trying to find a suitable picture for my new ID card, I mean I was committing to three years with this thing (who needs another bad ID photo in their life?). I scrolled through all my new headshots but nothing met the criteria, I mean why can’t a person have a lake in the background whilst starring with smouldering eyes into the camera… it works for casting agents, why not the National Rail?

After hours, and I really mean hours, I had the lightbulb thought of getting Aliyah to take a new photo of me set against one Impact-hubs’ fabulously white walls. I was apprehensive and probably put off the idea for so long because I just hate impulsive pictures that other people take of me, I just end up looking like MR Potato from Toy Story. But surprisingly the pictures turned out really well and of high quality. So if you see me in person I’ll happily whack out my rail card for you.


Wednesday was spent doing other productive things too. I attend First Act Workshops, run by the wonderfully amazing Ross Simpson (I couldn’t sing this Man’s praises enough he’s one of the best teachers and humans ever!). We’ve just kicked off a new term and we’re working on a new piece of immersive theatre called a ‘Night down the pub’; I’m playing the Landlady, my character and lines come from extracts of the play Two by Jim Cartwright.

I’m excited to have a new character to figure out, deconstructing the lines and seeing all the subtext. I’ve worked on this play before in secondary school and get the overall story but it would be lazy as an actor to rest on old knowledge there’s always something new to learn about a character and context.

Speaking of learning, I was fortunate enough to receive a guitar for Christmas, she’s pink and I’ve called her Candy. Unfortunately I can’t play any instruments as of yet I mentioned that to Ross and he brought his guitar in to teach me how to tune a guitar and showed me a few basic chords, e-minor and power chords.Did I or did I not say he was an actual babe? #SOGrateful

Getting used to holding a guitar, the whole reaching under to move up and down the strings /frets, is super awkward but I will persevere. Tune into next Wednesday to see if I’ve made any advancement in that area.

Until next time, peace, love and good vibrations

My name is Lexia, I’m a 21 year old poet and actress and I hope your life is playing-out better than mine at this moment in time, I genuinely do, if not you’ve probably heard the saying “misery loves company”. Any and all are welcome in my virtual humble abode. You can expect me to be all kinds of candid and goofy. If Ally McBeal and Jess (from New Girl) had a love child that would be me, but with more abstract daydreams.

As of 15:47 pm on the 11th January 2016 I have full-on free-fallen into being a fulltime freelance artist! AKA been made redundant.

And you know what guys? I don’t really know how to feel. I’m kind of numb.

Actually I’m lying, I do have some adjectives that simplify my feelings; abject fear, terror, scorn, ready and excited.


This is the second time this has happened to me and I know many people dream of being freelance, guess what? So do I It gives you the freedom to say “YES” and actually commit to projects, something you can’t do when locked into contracts and inflexible/unsocial hours.


But I had envisioned it happening at a much later stage in my career, I would be established, have contacts, and a reasonable haystack of savings I had squirreled away from my “Normie” jobs (anything that isn’t arts related, retail, waitressing etc.) to keep me afloat on rainy days or months.

Alas this is not how things seem to be playing out! I find myself chanting “I’mma trust you Universe, I believe in your guidance in my life” whilst starring up at the luminescent stars and planets in the roof of my shoe-box bedroom.
My brain is torn in a battle, desperately wanting to believe what I am saying is true whilst being super subversive and telling me my life is going down ‘shits-creek’ and I’m without a paddle. Just visualise Edward Munch's’ The Scream.

If anyone asked me for my 2 cents on what it meant to be an artist I would have to say that it was living in a perpetual state of uncertainty. Fortunately for me I’m a fighting optimist, I will work tirelessly to make my goals a reality. Plus I'm not really in a position to be giving away my pennies.

I keep telling myself between bouts of anxiety that I rose to the challenge before, with the help of my family and friends, that means I can do it again. This time around the dust has settled a lot more and I’m reasonably secure: I have a roof over my head, every time I ring my Mom and say I haven’t got a job she’s always like “you’ve got a roof over your head, and food to eat, God will provide”.

I only have one bill that comes out of my bank direct debit monthly now (phone), well until April then it will be two, and that equates to £27.90 or there about. I buy a monthly bus pass which is £60 and I definitely freaking need it.

Otherwise there is no freaking way I’m going to be able to go to events and perform, watch or network. I need to eat, contribute to home living expenses and just generally adult. Not to mention all the train tickets I need to buy to go down to London to audition for stuff *SLAMS HEAD ON DESK*


I basically worked out very quickly that I need money to make money. Thrifty just got a brand new sister.

I know things could be much worse but I decided a long time ago that I would stop comparing my life and belittling my struggles. I’m ready to make some magic happen this year, I plan to blog weekly this about all the trials and triumphs of being a young freelance artist. And all the little things in-between that help me progress.

I would love if you would follow me on my journey this year, I give you permission to root for me and laugh at/with me. If you’re freelance artist or writer too please leave some wisdom in my comment box.